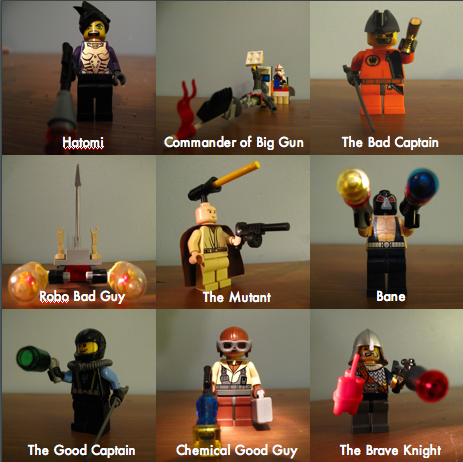 THE CAST OF CHARACTERS 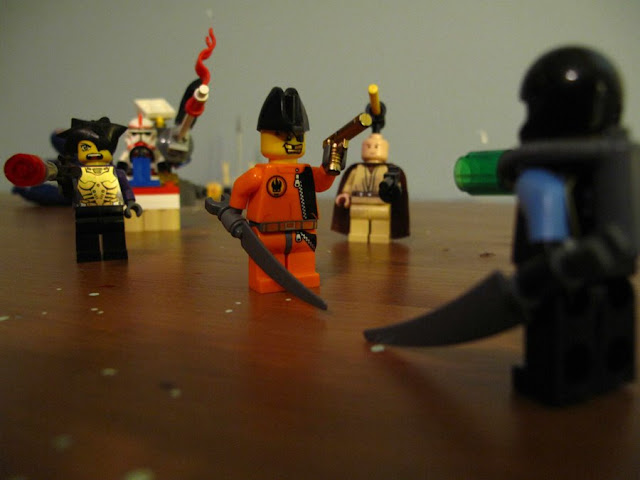 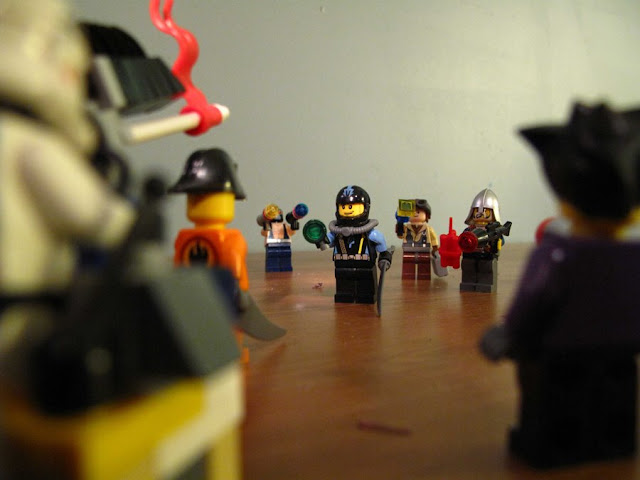 THE BIG GUN
The guns were flaring. Lasers were everywhere. The Good Captain shot his gun a million times. The Mutant almost killed him. The Good Captain was saved by Bane who pushed him out of the way and blocked the shot with his chest.

The Robo Bad Guy shot his lightening at Bane. It didn’t hurt him. It didn’t kill him. It just scratched him.

Bane came running at the Robo Bad Guy. He pulled out his legs and BOOM, it was dead!

The Brave Knight ran towards Hatomi and threw his dynamite. It hit her, knocking her unconscious. The dynamite was about to explode but the Bad Captain ran towards the dynamite, shooting his gun. He shot his gun at the fire and it knocked it out of his hand. The dynamite did not explode!

But the Brave Knight shot the dynamite and it did explod. It killed Hatomi and she flew up in the air and landed right in the hole where the Mutant was hiding. The Mutant threw her out of the hole because he was cramped. He shot the gun that came from his head. It hit the Brave Knight right on the head. Luckily the Brave Knight was wearing a helmet and he did not get hurt.

Just then, the Bad Captain shot his gun, hit the Brave Knight in the chest, and killed him.

The Good Captain ran towards the Bad Captain and they both raised their swords.

The fight began between the Good Captain and the Bad Captain.

They shot their guns but didn’t hit. One time the Bad Captain’s gun hit the Good Captain’s jet pack. The jet pack went wild and it flew up, it flew down, it flew upside down into the Big Gun they were going to destroy.

The Big Gun shot a big laser that made the Good Captain fly to another system. The Bad Captain laughed. “You can’t kill this Big Gun! Ha ha ha ha ha!

The Mutant jumped out of his hole and he laughed too. He he he he he!

The Mutant shot his guns. He hit Bane and laughed so hard he fell down to the ground.

The Bad Captain walked up to Bane. He looked at his back and saw the tubes that kept him alive. He shot the tubes and Bane died.

The Mutant ran towards the Chemical Good Guy.

The Chemical Good Guy thanked the Good Captain and the remaining good guys ran towards the Big Gun.

The Big Gun didn’t really vanish, it teleported to the planet of the Good Captain was on a few minutes ago. The Bad Captain laughed, “You fools – you’ll never get the Big Gun!”

But the remaining good guys and the Good Captain charged towards the Bad Captain. The Bad Captain ran away as fast as he could. He ran so fast and far way that he didn’t know where he was.

The Good Captain and the good guys didn’t know where the Bad Captain was either. So they gave up and went to look for the Big Gun.

The Bad Captain ran back towards the place where he was fighting earlier. The good guys were gone. The Bad Captain laughed, “They were smart to leave,” he said.

The Bad Captain didn’t know that the good guys were really leaving to find the Big Gun.

The Good Captain suggested that they better go to the place where he was earlier – the other planet – just to check to make sure the Big Gun was still there.

They landed in a different place from before. They walked up the cliff they were on and saw the Big Gun. The Commander of the Big Gun saw them and fired the Big Gun. He missed.

The good guy jumped up. They landed straight on the Big Gun and tried to tackle it. The Big Gun fired again. They good guys flew straight off it and landed on the cliff. They walked off the cliff and saw the Big Gun again. They jumped on it and started tackling it again. This time, they ripped the Big Gun up and they threw the pieces at the Commander.

It knocked him unconscious and the Good Captain swung his sword and cut off the Commander of the Big Gun’s head. Out of the neck came blood.

One of the good guys saw two chemicals he never knew about. He took them to put in his collection of chemicals and flew back to the battle scene to clean up. 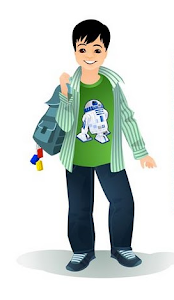 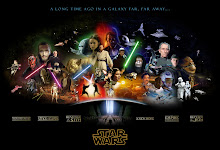 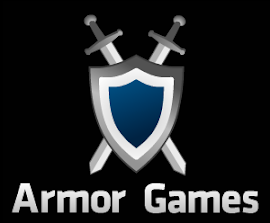